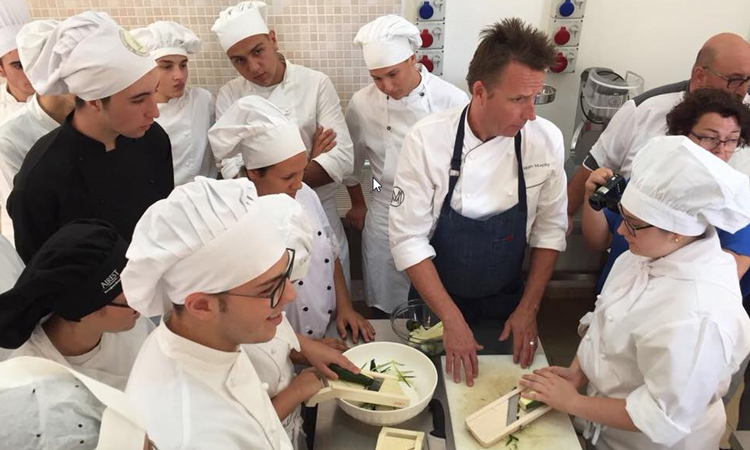 On September 26 U.S. chef and television star Marc Murphy visited the culinary high school “Ignazio e Vincenzo Florio” in Erice, Sicily. Before his workshop with students, Murphy, who is a fluent Italian speaker, shared his experience growing up in Italy and France and learning about food, and his work as a television star and restaurateur in New York with an audience of about 130 students and teachers who gathered in the school auditorium. On September 27, leading regional TV network TGS aired a 2-minute story on the school program in their prime-time newscast including on-camera statements by chef Murphy and PAO Baxter who told the journalist: “One of the goals of the U.S. Consulate in Naples is to create more exchange opportunities and collaborations between the American people and the people of Sicily and southern Italy.”

As part of the same trip to western Sicily, Marc also represented the United States at the 2018 edition of the Cous Cous Fest, the International Festival of Cultural Integration held in San Vito Lo Capo September 27-30. He won the jury’s special “health and wellness award” for the dish he prepared for the competition.  Other participating countries included Angola, Ivory Coast, Israel, Italy, Morocco, Palestine, Senegal, Spain, and Tunisia.   During the Cous Cous Fest, attended every day by several thousands of visitors, Murphy also took part in a public talk in San Vito Lo Capo’s main square, where he highlighted some core American themes, such as the value of diversity and integration, and the use of food as a tool for mutual understanding among people of different cultures and origins. Local media widely reported on the event highlighting the special award for the United States.