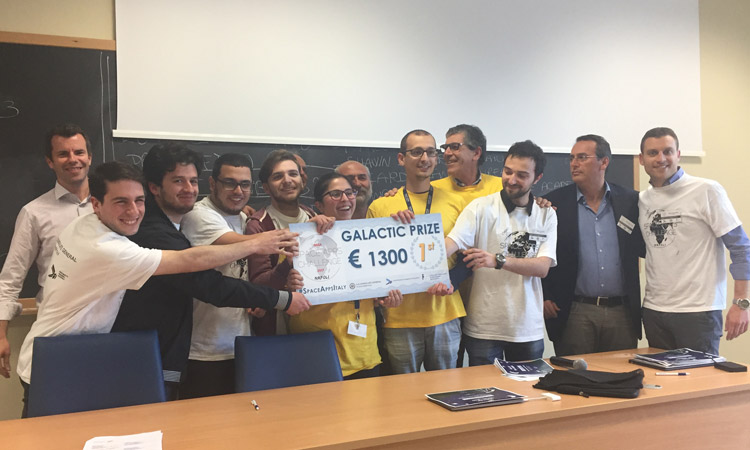 ‘Pizza Flyers’, the winning team of this Space Apps edition in Naples, together with the judges

“The aim of our app is to entertain airplane passengers, who usually get bored during the flight:” with these words the 7 members of the team ‘Pizza Flyers,’ all students from Naples iOS Developer Academy, explained their winning project “Sky Tour.” After an intense 2-day-hackathon over a ‘space weekend’, the mobile application that allows people to read on their smartphone information about cities, places of interest, natural and cultural landmarks that they are flying over, was awarded the first prize, followed by the “BEeSpace” team who came second with their “H.O.M.E. Lab” – a system inspired by beehives aiming at creating better work spaces for people to share – and the “Flying Mice”, third placed with “Cake Home”, a 100% eco-sustainable mobile home, to be used in case of environmental disasters.

The exciting news in this year’s edition came from the US Consulate General to Southern Italy, which in addition to providing organizational and logistical support to the event, also offered three cash awards of Euro 1,300, 1,000 and 700 respectively for Naples first, second and third teams.