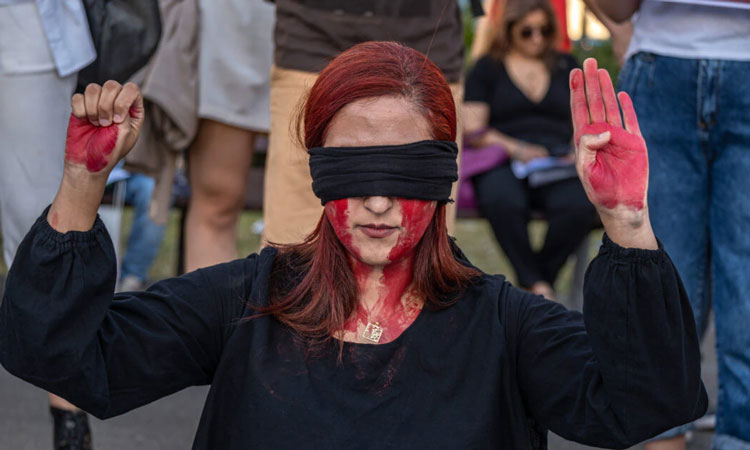 The World Health Organization estimates that one in three women have experienced or will experience gender-based violence (GBV) during their lifetimes.

Since the pandemic started, 38% of women have personally experienced online violence and 85% of women know someone who has been targeted for online violence, a study by the Economist Intelligence Unit found.

GBV prevention and response is a priority of the U.S. Department of State, says Katrina Fotovat, senior official in its Office of Global Women’s Issues.

“Gender-based violence has certainly been exacerbated since the pandemic,” she told ShareAmerica. “It occurs in every country and at every level of society, in public and private settings, online and offline. Women and girls really face a disproportionate risk of gender-based violence but people of all genders can be targeted for this kind of violence.”

What is gender-based violence?

According to the United Nations, gender-based violence includes sexual, physical, mental and economic harm inflicted in public or in private. It can also include coercion, manipulation and threats of violence.

The WHO reports that incidents of intimate partner violence are highest in South Asia and sub-Saharan Africa, though this form of GBV remains persistently high across all regions of the world.

“Individuals who face overlapping forms of discrimination are at an increased risk of experiencing GBV, so we really try to take an intersectional approach to our work,” says Fotovat. “For example, women with disabilities are four times more likely than other women to experience sexual violence.”

In addition to working on the forthcoming update to the U.S. Strategy to Prevent and Respond to Gender-Based Violence Globally, the State Department is teaming up with government agencies and the private sector to implement a survivor-centered approach to GBV, which includes:

The State Department also supports efforts to educate everyone to be an advocate for eliminating gender-based violence.

“An essential part of both our foreign policy and assistance efforts is to address the structural inequities and social norms,” Fotovat says. “Our approach includes engaging men and boys in both short- and longer-term prevention efforts, and equipping youth to become advocates in their communities to challenge harmful gender norms and create a more just and peaceful society.”

And as a part of the 16 Days of Activism against Gender-Based Violence — an annual international campaign to educate about GBV — Fotovat encourages everyone to be a gender champion in daily life and research local organizations to support.

“We need people from all backgrounds and all communities to stand up for gender equality,” she said. “GBV really is a human rights issue that affects all of us.”