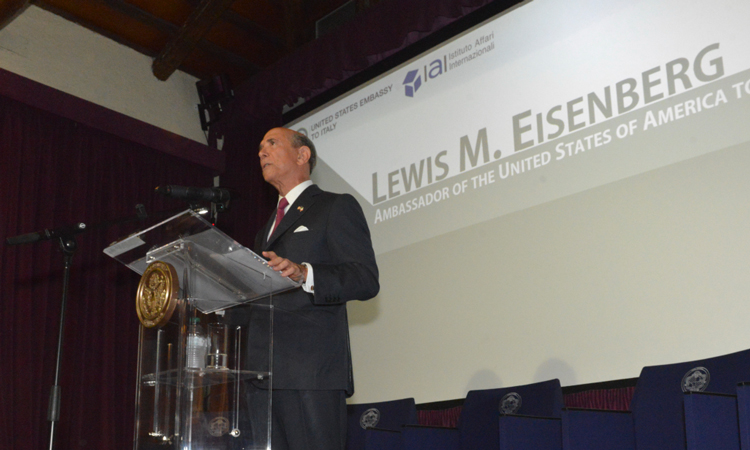 Good afternoon, everyone. It’s a pleasure to welcome you all to Villa Taverna for this timely conversation.

Our partner in organizing today’s event is Rome’s preeminent think tank, the Institute for International Affairs, or IAI. We’re honored to have with us today the President of IAI, Ambassador Ferdinando Nelli Feroci, who will be speaking in just a moment, as well as IAI’s Director, Nathalie Tocci, who will be joining us as a panelist.  Both the Ambassador and Nathalie are also distinguished academics who bring a wealth of experience to us.

I would also like to warmly welcome our other panelists:

We have our good friend Marta Dassù from the Aspen Institute, where she is the Senior Director of European Affairs and Editor-in-Chief of their journal, Aspenia.  Marta is also Vice President of The Center for American Studies here in Rome.

Speaking of CSA, we’re pleased to have the Center’s Director Paolo Messa with us today. CSA and Paolo are also great partners to the U.S.    I’m sure many of you were present when Paolo and Marta helped us host Deputy Secretary of State John Sullivan at CSA a few months ago.

Finally, no panel would succeed without a moderator, and we’re privileged to have Alberto Simoni, the Foreign Affairs Editor of La Stampa, here with us to share his wisdom and keep things moving. Alberto will be taking questions from the audience after our panelists speak.

Before I begin, I would like to sincerely thank the entire IAI team for its excellent cooperation in organizing today’s conference, and all of you for taking the time to join us.

I’d now like to offer my thoughts on this important moment in international relations, particularly on the uniquely important position of the United States with respect to Italy.

For American students, Italy is second only to the United Kingdom as a choice for studying abroad. That’s a remarkable fact.  About 35,000 Americans study here every year.

Each year around a million Italian tourists also visit the U.S., and about 5,000 Italian students attend U.S. universities.

Our relationship is also built on sacrifice. About 20,000 American troops died during the Italy campaign of World War II.  And Italian and American soldiers continue to stand together in Afghanistan, Iraq, and elsewhere today.

Our people share a desire for a secure and prosperous world, even as we confront the challenges of a world changing more rapidly than ever before.

Italy is facing an incredible challenge with the migration crisis through the Mediterranean. It is on the front line of the migrant flow from North Africa.

And instability in Libya has exacerbated the migration crisis and the potential for terrorist threats emanating from the region.

Although the United States supports the great work Italy has been doing in managing this challenge, the European Union needs a comprehensive approach to stem migration and work with Italy against the terrorism risks that comes with it.

Italy’s new government will be its 66th since the beginning of the Republic. I often hear Italian leaders say Italy has had only one foreign policy in that same period.  And the United States looks forward to continuing our close cooperation with the new government when it is formed.

Although the Trump administration has taken a new approach to many of our most important issues, our goals also remain very much the same. “America First” is a guiding principle of the President’s governing philosophy, but that does not mean “America Alone.”

In Davos, the President clarified this policy by saying that every leader should put his or her country first, but that does not mean it is at the expense of our alliances.

Now I would like to talk about several major challenges to our shared vision of a peaceful, prosperous world.

First, North Korea. A couple of months ago, as tension increased, it seemed we could have been on the brink of a dangerous conflict.  But now, through constructive dialogue, we have an opportunity to denuclearize North Korea.

Dialogue is critical. The United States, like Italy, values dialogue as the best way to resolve conflicts.

President Trump entered the White House with the desire to re-establish a strong relationship with Russian President Putin. But Russian aggression—which has been building for a decade—has made dialogue impossible.

We have all been targeted by Russia’s hybrid warfare: political, economic, informational, and cyber assaults that when used in tandem can cripple an open society. This is a global campaign to undermine the sovereignty and security of the United States and its allies.

When Russia increased its role in the war in Syria, it pledged to remove chemical weapons from the Assad regime. The brutal chemical attack last month has shown that Russia failed in its pledge.  And we are further appalled that Russia used a military-grade nerve agent in the United Kingdom.

Until that happens, our best tool, better than any alternative, to apply pressure remains sanctions.

The main reasons Italy’s exports to Russia fell in 2014 were Russia’s deteriorating economy, the rapid depreciation of the ruble against the U.S. dollar, and the decline in global oil prices.

Our analysis shows that these factors, not Western sanctions, account for 80% of the decline in Italy’s exports to Russia.

Even when we talk about Italian agricultural exports that were counter-sanctioned by Russia in 2014, they only represented 2% of Italy’s exports of those products globally.

Sanctions come with a cost, but they are working.

In China, we have an amazing phenomenon: the largest communist country in the world and also the fastest growing capitalist society. We cannot allow it to distort global trade and harm U.S. and Italian businesses and workers.

The scale of China’s efforts to acquire foreign technology unfairly and ultimately to take over key advanced economic sectors is an unprecedented threat to the world trading system.

For years, the United States has attempted to work with China cooperatively to address its unfair policies, but China has failed to resolve U.S. concerns.

The United States is taking a number of steps to pressure China to change its behavior, including: bringing a new case before the WTO, tariffs on products benefiting from China’s industrial policies, and possibly expanding investment screening authorities. We hope the European Union will take similar measures to defend its companies from these unfair trade practices.

We must also counter China’s efforts to use our open economies as a dumping ground for its industrial overcapacity, particularly in steel and aluminum.

Healthy steel and aluminum industries are vital to U.S. national security. For this reason, the President in March decided to adopt tariffs on steel and aluminum imports.  We have also worked with our European counterparts and other allies on alternative long-term ways to address this issue.

It is time China began to adhere to the global trade rules we have all agreed to.  The United States will not sit idly as China’s trade-distorting policies harm our businesses, workers, and national security.

Another major issue for all of us is Iran. President Trump announced that he is removing the United States from the JCPOA.  During his campaign and in his administration, the President has made clear that he believes the JCPOA is a flawed agreement for three reasons.  First, it lacks a provision on the manufacturing of long-range ballistic missiles.  Second, its sunset provisions are too short.  And third, it does not address Iran’s support for terrorists and proxy forces in the region.

The United States will look to work with allies around the world to develop a new agreement that addresses these concerns completely.

Lastly, I would like to discuss the North Atlantic Treaty Organization, which can be credited as a key reason that there has been more than seventy years of relative peace in Europe without a major war.

The twenty-nine NATO Allies work together to preserve peace and prosperity in Europe and North America.

President Trump has been clear about Allies fulfilling their commitment to spend two percent of GDP on defense. This is about burden sharing and showing the world NATO is ready to protect our shared freedom without question or hesitation.

President Trump does not automatically abide by the status quo. The United States is seeking peace through strength by using diplomacy, dialogue, and sanctions, when appropriate.

NATO’s Article 5 of the Washington Treaty has only been used once in the Alliance’s history, in response to the terrorist attacks in New York on September 11, 2001.

Today, we must continue to work together as an alliance to counter terrorism.

ISIS’s caliphate may not exist, but the threat continues to persist.

Iran has been harming our counterterrorism efforts in Lebanon, Iraq, Syria, and Yemen, and with proxies like Hezbollah.

The United States relies on our partners in NATO in the fight against terrorism and the Global Coalition to Defeat ISIS. We partner in information sharing and work together to strengthen societies and reduce the influence of extremist ideologies.

I am confident our friendship and partnership with Italy will endure no matter what challenges we face.

Thank you very much for listening. And now I’d like to invite Ambassador Nelli Feroci to take the floor.