Home Homepage | News & Events | The U.S. Supports the People of Venezuela as They Strive for Democracy 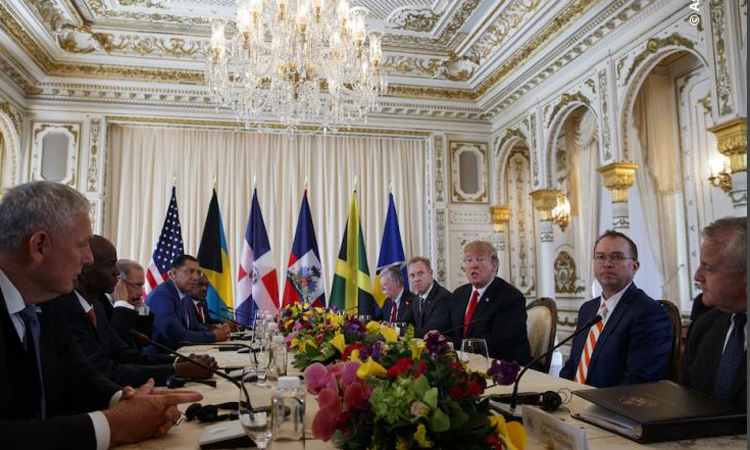 On March 22, President Donald J. Trump  welcomed Caribbean leaders to a meeting at Mar-a-Lago. Deputy Secretary of State John J. Sullivan joined the meeting, which included leaders, from the Bahamas, Dominican Republic, Haiti, Jamaica, and St. Lucia. The group held discussions on how best to support the Venezuelan people as they strive for democracy, as well as future engagement in the region under the U.S.-Caribbean 2020 strategy.

On March 22, the United States Department of the Treasury determined that Venezuela’s financial sector is subject to sanctions pursuant to Executive Order 13850, and sanctioned a major Venezuelan bank and four subsidiary banks used by Maduro and his regime as slush funds to evade United States sanctions and to move money out of Venezuela.

In a statement, the White House Press Secretary said, “The United States will continue to take steps to pressure Maduro, his regime, and those who support him, until they step out of the way and allow a democratic transition to occur under Interim President Guaido and the National Assembly of Venezuela.” This action underscores President Trump’s commitment to preventing Nicolas Maduro and his regime from further stealing Venezuela’s resources and wealth for their personal gain, while the people of Venezuela suffer from lack of food, medicine, and reliable power and water.

On March 19, the United States took action to prevent the former Maduro regime from further plundering Venezuela’s assets and natural resources. This action designated the Venezuelan state-owned gold-sector company, MINERVEN, and its president, Adrian Antonio Perdomo Mata, for operating in the gold sector, which is subject to sanctions as outlined in Executive Order (E.O.) 13850.

On March 19, the United States co-sponsored an event with Albania, Argentina, Colombia, the Czech Republic, Denmark, Georgia, Hungary, Israel, Romania, and the United Kingdom at the United Nations in Geneva, to highlight the dire human rights situation in Venezuela. Deputy Assistant Secretary for Western Hemisphere Affairs Carrie Filipetti led a panel that included a former prisoner of conscience, an investigative journalist, a legal expert, and a Member of the National Assembly who shared firsthand accounts of repression and explained the depth of the human rights crisis under the former Maduro regime.

The United States remains committed to helping the people of Venezuela. The United States has provided more than $195 million-including more than $152 million in humanitarian assistance and approximately $43 million in development and economic assistance, to support the generous efforts of countries in the region that are hosting the nearly 3.4 million people who have fled the chaos in Venezuela.