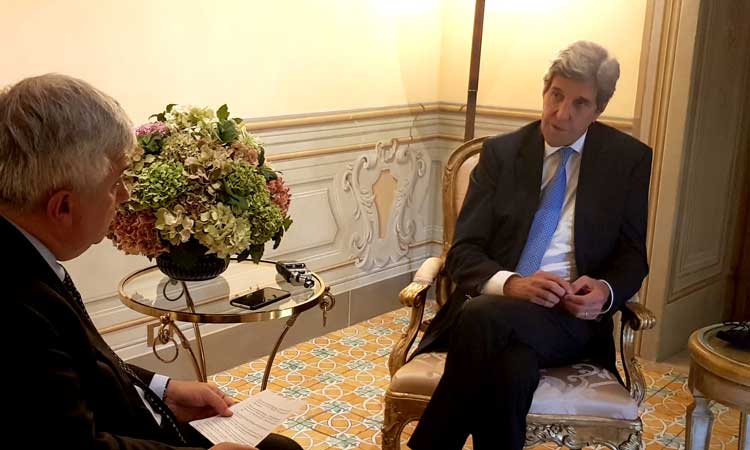 “By protecting the environment we have a real possibility of making life better for people; we are on the verge of the greatest change since the industrial revolution”. U.S. Special Presidential Envoy for Climate John Kerry, accompanied by Senior Advisor and former ambassador in Rome David Thorne, meets us at Villa Taverna. He carefully examines the preparatory documents of the G20 forum on Environment, Climate and Energy opening today in Naples. Kerry is aware of Beijing’s resistance and inter-European tensions, but he looks beyond it: he believes “in a convergence of the G20 on the G7 commitments”, he speaks of “a possible collaboration with Moscow”, he applauds the “EU cohesion” in spite of the polemics on the “Green Deal” and he looks forward to the UN conference planned to take place in November in Glasgow because “the co-presidency of Italy and Great Britain gives us high hopes”.

Secretary Kerry, you are asking the G20 summit to follow the G7 in its commitment to climate protection. Do you think the Naples summit will listen to this suggestion or will it be blocked by cross vetoes?
“My impression is that individual countries want to do better in environmental protection and they want to do it now.”

Yet the differences are there and the summit appears all uphill….
“There can be differences of opinion on whether a decision is enough or whether someone is doing better than others. So we have to listen to everyone, carefully. And that’s what I will do at the Naples summit. But the G7 was a great success in terms of the commitments that were made – no financing of coal-fired plants overseas, cutting down emissions by 2030, and limiting global heating to 1.5 degrees – and I believe we can continue down this path with the full support of G20. We have more options in Naples.”

Italy, the rotating G20 chair, is trying to facilitate an agreement at the Environment Summit. Will it succeed?

“Absolutely. Your ministers, Cingolani to name one, are doing a great job, they are very competent. I met Premier Draghi and he described Italy’s ambitions very clearly: not simply to lead COP26 to success but also to point the way forward. The co-presidency of Italy and Great Britain at COP26 gives us high hopes”.

The European Union has committed to reaching zero emissions by 2050, reducing greenhouse gases by at least 55 percent below 1990 levels. Is this a realistic goal or could it cripple our economies?

“It’s a realistic, achievable and positive goal for the economy. We are facing the possibility of the greatest economic transformation since the industrial revolution. Millions of jobs will be created. There is no question about it. For instance, in America we need to create a national electric grid – which we don’t have – and that means jobs, electricians, plumbers, pipe fitters, construction workers, heavy equipment workers. We are faced with the need for massive construction and other countries are in a similar situation. In addition, we need to develop new technologies: green hydrogen, electrolyzers that are less expensive the more efficient they are. Hydrogen is zero emissions if it is not produced with fossil fuels, this means that we can produce clean hydrogen. Of course, there is also blue hydrogen that can be made with gas, but we want to reduce all emissions. Can we do that? Yes. Is it clear how we’re going to get there? No. We need to raise our ambition. And that is why we will meet in Glasgow, in November, at the UN COP26”.

The EU wants to introduce a tax on imported goods produced creating harmful emissions. It’s a sort of environmental tax. What is the US position on that?

“President Biden asked me and my team to evaluate the impact of this possible EU tax. We have no idea what effect it would have on the production chain, whether it could negatively affect trade and jobs. We need to evaluate all these things carefully. But the idea that a country can export cheap products because it doesn’t meet environmental standards is not acceptable. There are countries that have to answer for such actions. It’s fair. There may be different ways to get there but we can embrace the basic idea”.

More broadly speaking, do you think the European Union and the United States will succeed in harmonising environmental laws and regulations?

“I do, absolutely. The more harmony we can create between us, the better it will be for everyone. Reaching common principles and rules on the environment is important.”

In mid-July, you met in Moscow with Russian President Putin, who spoke of “common interests with America” on the environment. How can the Kremlin help reach a UN agreement in Glasgow?

“Russia can do a lot. Putin has made it clear that he considers climate change to be a problem for his country as well. Russia has methane and in its northern regions it’s a problem where it is leaking in the thawing tundra, in the permafrost. Large buildings and entire cities have become unstable because of the soil thawing and melting. Also, Russia has gas, and although it’s not the ultimate solution, using gas can help bring the solution closer.”

In short, you looked President Vladimir Putin in the eye and got the impression that he really wants to protect climate. Is that the case?

“I have been in diplomacy long enough to know that words are just words and cost very little. So words are needed to reach agreements that, once signed, become facts and are observed by everyone. That is why commitments are necessary. I believe that Putin sees the problems but it remains to be seen when he will accomplish his goals”.

China continues to support financing of coal-fired plants overseas. Why is President Xi going in this direction?

“You have to ask the Chinese. I think it’s a problem, it’s a challenge, that Beijing must be accountable for. We know some countries consider these plants crucial for their energy production but we don’t think it’s accurate anymore: today we have wind, solar and other renewable sources that are available and cheaper. It is up to countries like China to embrace these benefits”.

In your speech in London on Monday, you offered China the possibility to ally with the West in protecting the climate. Do you think they will accept?

“Until they refuse, there’s a possibility they will accept. I have been working a lot with the Chinese. I have had 14 virtual meetings with them and on one occasion, when I went in person to Shanghai, the outcome was positive. So I think China will accept, because we all know that without her – as without the other big economies – we can’t do it. If we go to zero emissions and Beijing’s emissions continue to grow we’ll fail in protecting the planet. It is not a matter of politics or ideology but of mathematics and calculation: and scientists know very well what we have to do”.

On the road to the UN Climate Summit in Glasgow can we say that the biggest obstacles are China and India?

“No. They are part of a mosaic of challenges we are dealing with. The climate challenge is different in every country. Some don’t have electricity, others have massive amounts of energy but no gas. We need to leverage new technology to address this agenda. Of one thing I am certain: the climate issue can only be addressed and solved if all countries participate. It can generate jobs and wealth virtually everywhere. We need regional agreements on river water, for example, so that everyone can benefit from clean hydro-power.”

In short, do you believe in the possibility that the EU overcome divisions and joins the U.S. in the fight against climate change?

“Yes, Europe has overcome Brexit and now faces the climate crisis with determination. Thanks to its leader, Ursula von der Leyen and Vice President Timmermans it can succeed. It can join the U.S. in promoting new alternatives, green technologies, financial solutions, clean energy sources and power plants that make a season of discovery possible. It’s a great moment for all of us because we can make life better for people. It’s an opportunity for all of humanity.”