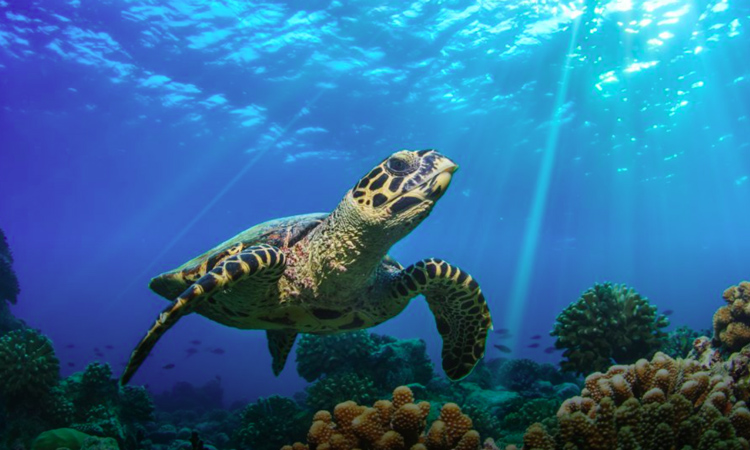 A hawksbill sea turtle swims over a coral reef in the Maldives. (© Willyam Bradberry/Shutterstock)

Sea turtles have been swimming the world’s oceans for more than 100 million years. Yet today the survival of these living relics from the era of dinosaurs is threatened.

Of the seven species, three — the green, hawksbill and Kemp’s ridley sea turtles — are listed as endangered or critically endangered on the Red List of Threatened Species, issued by the nonprofit International Union for Conservation of Nature. Another three — the leatherback, olive ridley and loggerhead sea turtles — are listed as “vulnerable,” while there isn’t enough data to determine the status of the flatback sea turtle.

Leatherbacks and hawskbills keep jellyfish and sponges, respectively, in check. Green sea turtles eat sea grass, which must be kept short for many fish species to breed in it.

Bycatch — accidental capture through imprecise fishing methods aimed at catching other sea creatures — is a serious concern. Beach development is another problem, since sea turtles lay their eggs on beaches and hatchlings must make their way to the ocean without interference.

Christine Dawson, who directs a conservation office at the U.S. State Department, cites “the devastating loss of nature, of biodiversity in all its richness” as the most worrisome trend.

“This is compounded by the enormous volumes of illegal wildlife moving around the globe, facilitated by organized criminal networks profiting from wildlife trafficking,” she said. Such trafficking includes black-market trade in sea turtle eggs, shells and meat.

But there is some good news, according to the State Department’s Joseph Fette. Turtle excluder devices, or TEDs, are reducing bycatch by commercial fishermen. In nations where the fishermen have used TEDs for a while, there is widespread acceptance and appreciation for how a TED not only saves sea turtles but makes trawling more efficient, Fette said.

Trafficking is getting “high-level attention as serious organized crime,” Dawson said. “International organizations, governments, nongovernmental organizations and community stakeholders are getting smarter and better at combating wildlife trafficking — and recognizing the patterns and convergence with other forms of conservation crimes.”

Further advances to protect sea turtles are in the works — including illuminated gill nets, which are being tested in Peru, Mexico, Indonesia and elsewhere. “The first testing of lighted gill nets began about a decade ago,” said Ann Marie Lauritsen, a sea turtle conservation expert at the U.S. National Oceanic and Atmospheric Administration.

“Observed decrease in the number of sea turtles bycaught suggested that net illuminations may be an effective conservation tool for certain gill net fisheries that operate at night,” she said. “Testing continues so that we can better understand the effectiveness of lighted gill nets under varying environmental conditions and to understand whether there are differences related to sea turtle species.”

The U.S. Fish and Wildlife Service works with governments and nongovernmental organizations worldwide to “conduct and share research on sea turtles, to protect nesting areas, and to tag sea turtles to track their movements,” Fette said. Similarly, the National Marine Fisheries Service does research and develops better fishing methods around the globe to reduce harm to sea turtles.

The State Department supports the efforts of both agencies and manages a program to certify nations whose shrimp-harvesting methods do not harm sea turtles.

The Inter-American Convention for the Protection and Conservation of Sea Turtles promotes the protection, conservation and recovery of six turtle species and their habitats within the waters of signatory countries throughout the Americas and the Caribbean.