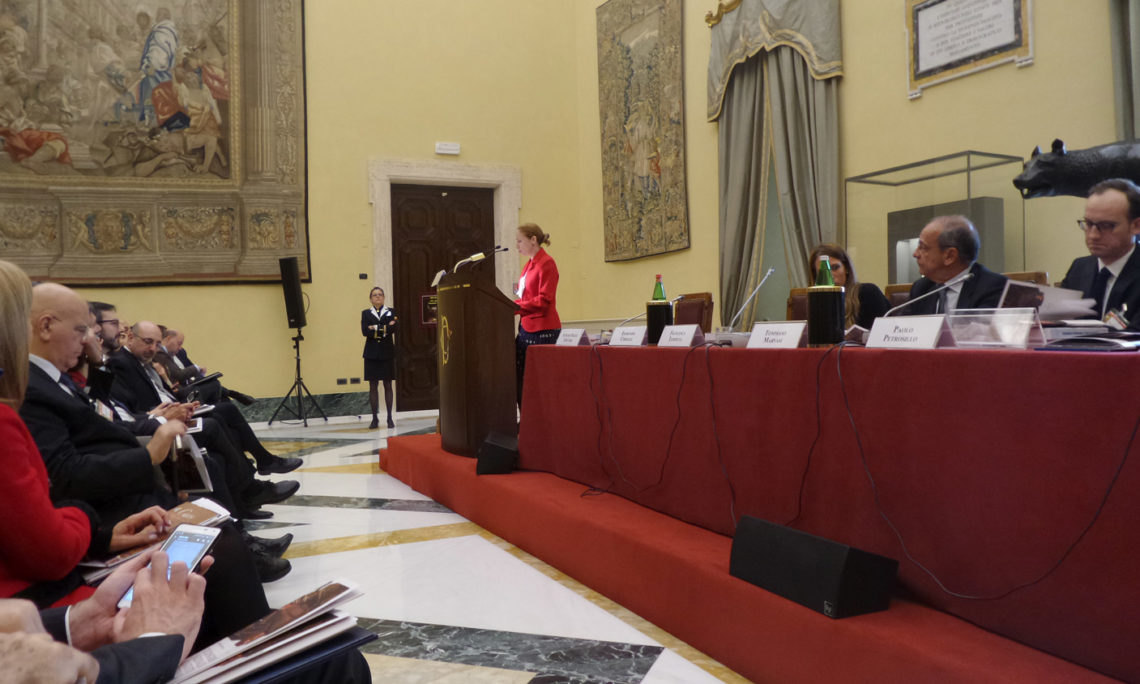 Ambassador Phillips and his whole Embassy team have always been strong believers in the idea that Italy has a lot to offer companies that choose to invest here – a great “Made in Italy” brand, innovation, high quality expertise, and great design.  But, we often hear that one thing that holds Italy back is its slow civil justice system.

The Ambassador views civil justice reform as a way Italy could make itself a more attractive destination for foreign direct investment.  He has made this a central part of his message on the Italian economy during his time in Italy.  He has given speeches in Milan, Florence, and Rome to business leaders and to students on the importance of civil justice reform in Italy, and has also published articles about civil justice reform in leading journals such as Formiche and Legal.

We know that many key Italian legal experts and officials understand the issue and agree with this idea.  One of the reforms that Italy took was the introduction (some would call it the re-introduction) of mandatory pre-filing mediation in September 2014.  We’ve supported this policy as a way of reducing the backlog and case load in Italy’s courts and as a way for parties to resolve their disputes more quickly and more efficiently than going to court.  The trick, as they say, is how to expand the culture of ADR?  This is the challenge – for all of us.

Perhaps the biggest event of the Embassy’s work on ADR was the two-day event in September at the Embassy and the Ambassador’s residence – one of the best attended policy-themed events ever at Villa Taverna.

The Ambassador hosted around 100 guests, including lawyers, judges, leaders from the bar associations, and leaders from business and insurance.  Each group talked about ways it could use its position to encourage a broader use of ADR in Italy.  Justice Minister Orlando also came to Villa Taverna, giving closing remarks to the audience, emphasizing the need for Italy to continue its work on civil justice reform in general, and the key role that the use of ADR plays in reaching these goals.

We now know that Italy’s efforts have had some very positive effects.  Italy can point to measurable successes in civil justice reform and ADR.  To mention just a few examples:

There is still work to do.  As the old saying goes, “time is money,” and we can’t expect companies to leave thousands, if not millions, of dollars tied up in litigation while a case works its way through the system.  In the United States, about 90 percent of cases that are filed settle before trial, because we encourage mediation or working with a judge to settle a case even after its filed.  The parties negotiate and then sign an agreement, and that’s it – no appeals, no waiting to enforce a judgment.  The case ends and they can go back to focusing on their business.  And the agreement reached in the mediation is enforceable like a judgment, should the defendant, for some reason, decide not to fulfill its obligation.

And this is not just my opinion, it’s one shared by the Italian people.  Just a few weeks ago, in late September, the national statistics agency ISTAT released a survey about Italians and civil justice.  The results were quite interesting.  More than half of Italians involved in civil suits are unsatisfied with the civil justice system.  Why?  Time and Money. According to the survey, the vast majority of people who have been waiting five years or more were “deeply dissatisfied, ” as were those who had sustained unexpectedly high costs or if the judgment was unfavorable.  What else do Italians think are problems with their civil justice system?  More than half the people surveyed were critical of the bureaucracy involved.  It takes too long, costs too much, and is too complicated.

But, and here’s the important point for all of us today, only 42 percent had heard that ADR was an alternative to resolving disputes before going to court, and only 3.6 percent of the people had used ADR at least once to resolve a dispute.  These two figures show there is work to do to spread the culture of ADR in Italy.  We know that mediation works, when people use it.  But it needs to become a part of the culture of dispute resolution.  If Italy can do this, and I think Italy can, I believe that within a few years, a survey like this one will look completely different.

The European Commission released a favorable report a couple of months ago, directed at all Member States, that spoke favorably about the types of efforts Italy is taking to encourage mediation.  It urged all EU Member States to continue their efforts to promote and encourage the use of ADR, calling on them to make mediation available in even more cases.  This is good advice, from another important institution that supports your principles for expanding the use of ADR in Italy.

In the United States, we know that spreading the culture of ADR is key to improving civil justice.  The United States has confronted many of these same issues and found solutions that have worked.  Years ago, our courts also suffered from delays, and we worked hard to find the answers that have made a tremendous difference.  I hope Italy will continue to work to find answers as well.

As many of you know, Ambassador Phillips will leave his position early next year, as our Administration changes.  But I want to assure you, the Embassy’s work on this important topic will continue.

We remain engaged with the partners who helped us make the Ambassador’s event at Villa Taverna such a success.   We intend to keep the dialogue alive, even as faces change at the Embassy in the next few months.

The Embassy will continue to help promote a culture of ADR in Italy.  During the conference we hosted four American experts from JAMS – the leading American and global provider of private ADR specialists – who conducted a mock mediation of a commercial dispute.  We recorded the mediation and will be providing copies to law faculties throughout Italy.  We already have plans to bring over other U.S. experts in ADR next year, to meet with and work with law students in Rome, as well as outside of Rome.  Exposing law students to ADR as part of their training, and showing them the importance of thinking like problem solvers, not just adversaries, is a critical part of growing and expanding the culture of ADR.  We hope the students will carry this idea with them as they start their legal careers and, most importantly, that their new bosses are receptive to innovative ideas from the next generation of Italian lawyers.

We know that Italy is also continuing its hard work on maintaining the progress of expanding the culture of ADR.  The Commission reviewing ADR in Italy, led by Professor Alpa, has been at work since March of this year.  The Commission’s members, taken from the bench, the bar, and academia, and from Italy from north to south, have an opportunity to shape ADR in Italy for the future.  Its report on ADR is due to the Ministry of Justice in January next year and we look forward to its release and recommendations.

I thank you again for the invitation to be here today, for your work in the past on ADR in Italy, and for your work in the future to build on what you’ve accomplished so far.  We, at the American Embassy, look forward to continuing our discussion and partnership on this important initiative.