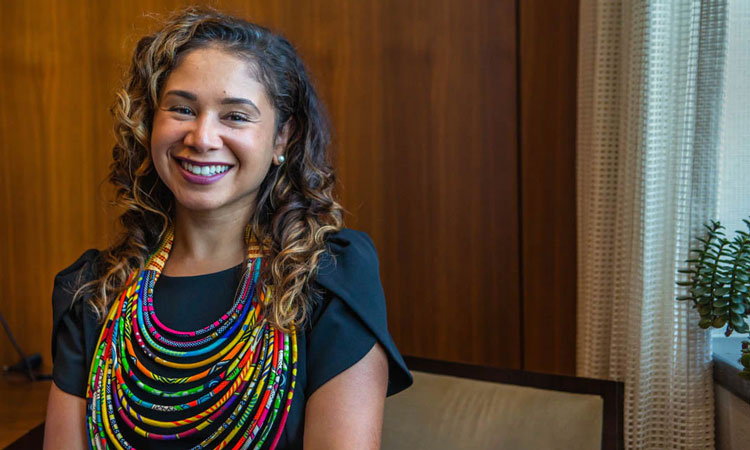 Desirée Cormier Smith, the newly appointed special representative for racial equity and justice at the U.S. Department of State — the first person to hold that position — is ready to tell anyone who will listen exactly what she does and how racial equity relates to U.S. foreign policy.

As Cormier Smith explains, her job carries a twofold mandate: first, to promote the economic, political, social and human rights of marginalized racial and ethnic communities (including indigenous groups) worldwide and, second, to combat racism, discrimination and xenophobia.

Too often, members of marginalized racial and ethnic communities are excluded from decisionmaking in government and other arenas. To help change that, Cormier Smith meets with grassroots activists — as well as government officials — when she travels overseas in her new role.

“These communities know better than anyone what issues they’re most affected by,” she says. “My job is to listen to them” and to foster their inclusion in decisions that shape their lives. At the same time, “my job is not to lecture or condemn other governments on their treatment of marginalized communities.” While the United States hopes to lead by example, “I’ll acknowledge that we’re not perfect and have a lot to learn. I’m happy to hear about other countries’ best practices and to share ours in return.”

U.S. foreign policy can strengthen democracies by encouraging participation of marginalized groups, according to Cormier Smith. “I do not use the term ‘minority’ because, in some places, these groups are numerically the majority,” she says.

For Cormier Smith, promoting racial justice and equity isn’t just a job, it’s in her blood. “My grandfather [Los Angeles Sentinel columnist Larry Aubry] was a pretty well-known civil rights activist and writer,” she says. “As a child, he integrated his school and remembered seeing angry white parents outside,” protesting the presence of Black students on campus.

While her grandfather was “very focused locally” on racial justice in and around Los Angeles, she takes a different approach. “I recognized that I was incredibly privileged to have access to institutions like Stanford University [where she earned her undergraduate degree], Harvard University [where she earned her master’s degree] and the State Department,” all of which foster a global perspective on tackling racial inequities.

Previous diplomatic postings, in Mexico and South Africa, also confirmed her sense of vocation about promoting racial justice and equity. She noticed that members of marginalized communities, both abroad and at home, “are more deeply affected by all inequities,” such as rates of unemployment, the COVID-19 pandemic, food insecurity and democratic backsliding, she says.

“We are grappling with issues in our cities that we see as development issues overseas,” she says.

Promoting equity worldwide, according to Cormier Smith, “is frontier work for the department, a new concept and a long-overdue acknowledgement” of the disproportionate effects of societal problems on marginalized communities everywhere. She wants her State Department colleagues to understand that, like women and girls around the world, people belonging to marginalized racial and ethnic communities are affected more severely by global inequities.

“It’s an honor for me to do this work. It really excites me, it energizes me,” she says. “It may sound clichéd, but it’s my way of making the world a better place and continuing my grandfather’s legacy.”