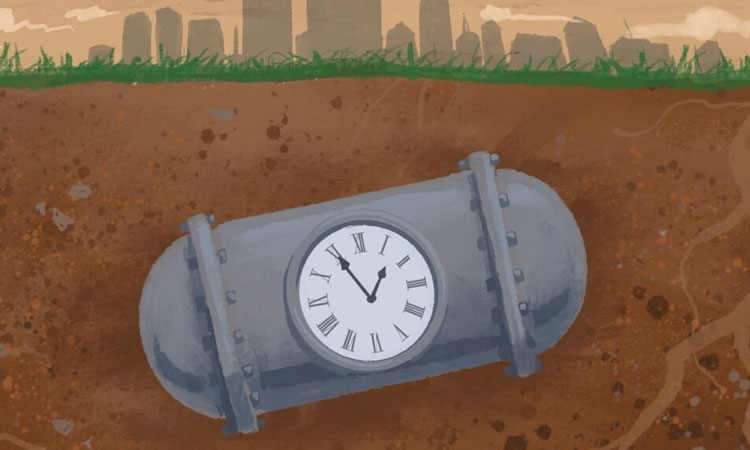 Perhaps because we live in dramatic times, people worldwide are thinking about their place in history. Many are creating time capsules so that their descendants may one day get a glimpse of life today.

The number of time capsules created since the pandemic began equals the number from the previous 350 years combined, according to Adrienne Waterman, chairwoman of the International Time Capsule Society. Some individuals and families have created time capsules related to life (and in some cases the death of a loved one) during the pandemic as a cathartic gesture.

What is a time capsule?

People gather items that they believe fairly represent current society and preserve them in secure containers in spaces ranging from building cornerstones to satellites to underground classrooms.

Recently, technology has helped people create sometimes-quirky digital collections of photos, data and other records of their daily lives. But for centuries people buried physical artifacts in public spaces or on privately owned land. In the United States, colleges and cities frequently bury artifacts. Regular people do too. The International Time Capsule Society records where time capsules are located to improve the chances that in the future they can be unearthed.

“People care about their memories. In the past, the only way they had was to pass them along in their family,” said Waterman, whose company, Not Forgotten, digitally archives people’s memories. “Technologies are evolving quickly, making archiving accessible to the average person.”

Blockchain technology, a way of widely distributing data, can spread time capsules over many locations so that a natural disaster in one location won’t wipe out the records.

Here are some interesting examples of time capsules:

A 2017 Polish polar station time capsule on an Arctic island has totems of biology, geology and technology so that if many populations were wiped out there would be a record of today’s state of knowledge.

In 1992, the television channel Nickelodeon encouraged children to vote on what to put into a giant orange ball that will be opened in 2042. Those kids, now adults, have made it the most popular capsule on the society’s site, Waterman says. It is searched 50 times more than any other. (The capsule includes part of the Berlin Wall, a skateboard, music by Michael Jackson, bubble gum and a VHS tape of the movie Back to the Future.)

In the 1970s, 2,800 floating capsules were launched to measure ocean tides during Expo 1975 Okinawa. The theme for the exposition was The Sea We Would Like to See. The capsules also contained a message from a Japanese child.

The Crypt of Civilization at Oglethorpe University in Atlanta is possibly the world’s largest time capsule at 6 meters by 3 meters, says Eli Arnold, the school’s librarian. He good-naturedly concedes that it was something of a publicity stunt, devised in 1936 by longtime president Thornwell Jacobs (who had the 1920s discovery of famed Egyptian pharaoh King Tutankhamun in mind). A stately building above the “crypt” houses sociology and music classes. Below is a steel vaulted door and a room scheduled to be opened in the year 8113. (Jacobs estimated that the year the crypt was filled, 1936, would be a midpoint between the start of recorded history and the 8113 date of the opening.) The room contains a well-documented odd lot of items — including aluminum foil, a cigarette lighter, a wheel and a radio. Arnold acknowledges the time capsule may be a bit silly but says it does provide a snapshot of life in 1936.

Recent dramatic events — including racial justice protests following the police killing of George Floyd in 2020 and the ongoing pandemic — have renewed Americans’ interest in commemorating current events in time capsules.

U.S. memorials are undergoing a reevaluation that has often led to removal of Confederate monuments that glorify those who supported slavery. Earlier this year, a statue of Confederate General Robert E. Lee in Richmond, Virginia, was removed and a time capsule — with items noting recent protests over racial justice — was buried in its former base.

Not all the time capsules make it to their intended audiences. Sometimes their contents rot. Early capsules were often stored in wood weathervanes that didn’t protect items from the elements. And more recent digital collections face the challenge of changing technology. Who, centuries in the future, will have equipment to play today’s DVD or Blu-ray Disc?

That is why the Library of Congress has posted storage advice (PDF, 56KB) for those who may want to create their own time capsules. Despite the challenges, Waterman says, creating time capsules will continue to “capture civilization in its raw beauty.”