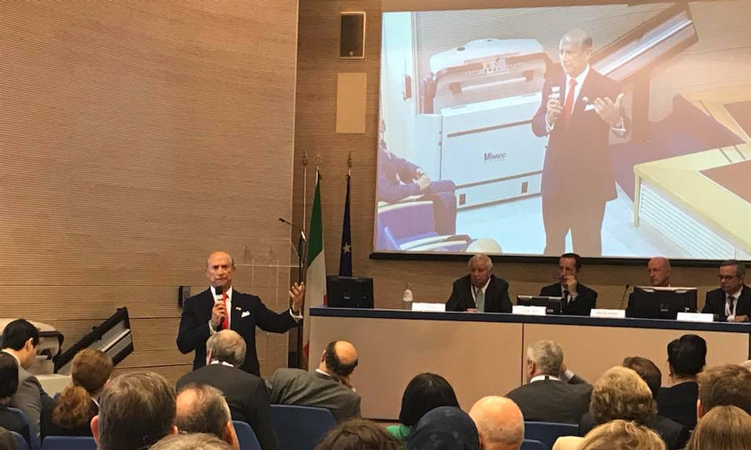 I would like to thank Under Secretary Manlio di Stefano for his remarks and Noel Lateef, President and CEO of the Foreign Policy Association, for the kind invitation to speak today.

Thank you also to Paolo Magri, Executive Vice President and Director of ISPI, for his generous introduction and to our distinguished panelists and guests.

I am looking forward to a valuable discussion on the future of the transatlantic relationship.

In 1949, 12 countries – including the United States and Italy – founded NATO in Washington.

Today, our alliance of shared values has expanded to 29 countries, and we hope to welcome Macedonia soon as the 30th ally.

Speaking of the transatlantic alliance, President Trump said, “The world has never known anything like this community of nations.  We must have the desire and the courage to preserve it in the face of those who would subvert and destroy it.”

We believe in peace through strength.  And the power of our Alliance comes from shared values:  democracy, the rule of law, and freedom.

In this complex world, expanding our friendships and deepening existing ones is priceless.

What course will we chart?

Our future lies in sharing responsibility.

We must counter Russian aggression and defend our economies from unfair Chinese competition.

We must seek a comprehensive deal with Iran to address the whole spectrum of destabilizing behavior.

And we must stabilize Europe’s southern frontier.

At the same time, we must also bolster our economies.

Addressing trade imbalances – like our $32 billion trade deficit with Italy – and spurring growth will generate resources to protect our nations.

I have been asked if the United States has lost interest in Europe.  As the trade figures show, nothing could be further from the truth.

Europe is by far our largest economic relationship with more than $1.1 trillion in annual commerce.

Even as we seek to address new challenges – like unfair trade practices or uncontrolled migration – we must counter the view that modern ills are the product of a conspiracy of capital or power elites.

Democracy and capitalism have proven the most effective instruments in history for lifting millions of people out of poverty.

Questioning these hard-won gains does not help us confront today’s challenges.  Rather, it plays to those outside our alliance, like Russia and China, who would benefit from our internal division.

Let’s focus on Russia and China.

Russia and China are determined to make our economies less free and fair.  They are growing their militaries, and they are seeking to control information and expand their influence abroad.

Their policies challenge allied solidarity and erode our security and prosperity.

We have responded to Russia’s illegal invasions of Georgia and Ukraine with sanctions because borders and sovereignty are paramount.

Sanctions have been effective in stopping Russia from seizing more territory in Ukraine.  They will remain until Russia fulfills its obligations under the Minsk Accords.

China, in turn, is a military and economic challenger.  Its desire to crack our long-standing consensus on free markets is evident.

China’s massive theft of intellectual property, dumping of commodities in world markets, and unwillingness to correct record trade deficits are at the root of the exchange of tariffs with China.

Turning to Iran, I will reiterate President Trump’s message: “We cannot allow the world’s leading sponsor of terrorism to possess the planet’s most dangerous weapons.”

The United States wants to work with Europe on a deal with Iran that comprehensively addresses the regime’s destabilizing behavior.

We must counter Iran’s missile program, support to terrorism, and malign regional behavior – not just its nuclear program.

In addition, the future of our alliance depends on stabilizing Europe’s Southern frontier.

Every September 11, we honor the nearly 3,000 people who were killed in those terrorist attacks.

We also honor the memory of U.S. Ambassador J. Christopher Stevens and our colleagues killed in Libya.

Their murder and the multiple nationalities of the victims of 9/11 remind us that terrorism is a global issue.  The efforts of every sovereign nation are needed to defeat it.

How can we best respond to these threats?

We must take responsibility for our security and defense.

I thank Italy for graciously hosting 30,000 U.S. military and civilian personnel and their families – the second largest number of U.S. troops and families in Europe.

Italy is also the second largest contributor of troops in Iraq and a top contributor to NATO’s mission in Afghanistan.

The United States has accepted our share of the responsibilities.

Since January 2017, we have requested more than $11 billion in new funds for the European Deterrence Initiative: a sign of our enduring commitment to Article 5 and the territorial integrity of all NATO Allies.

The United States spends 3.5% of our GDP on defense.

But, it is clear we cannot do this alone.

All Allies must fulfill the pledges made in Wales in 2014 to spend two percent of GDP on defense and twenty percent of defense budgets on capabilities by 2024.

So as we reflect on the 70th anniversary of the Marshall Plan and NATO, I must highlight that today is a special day in U.S. history.

More than five centuries after the Italian navigator made his world-changing voyage, we are ready to embark on a new phase in the strong U.S.-Italian relationship.

We applaud Italian leadership in defending its borders and addressing migration challenges with characteristic humanity.

The history of the transatlantic relationship serves as a model for our future with the Sahel and Africa – the fastest growing continent.

We share Italy’s desire for a stable, unified government in Libya, that is able to deliver security and prosperity for all Libyans.

And we look forward to Italy’s international conference on Libya on November 12 and 13.

The strategic partnership President Trump and Prime Minister Conte announced in July at the White House opens a new chapter.

We will work together to stabilize the Mediterranean, deepen our security cooperation, and strengthen energy security.

To conclude, some are skeptical of the new Italian government.

The financial markets express their views minute-by-minute.I believe this government can succeed because its elected officials – like the present U.S. Administration – are working for the interests of the people:  It is democracy in action.

This approach will bring success.

Spreading fear, division, and making empty offers of quick fixes will not.

There is nothing more valuable to our long-term economic prosperity or more necessary for our mutual defense, than the bonds of history, culture, commerce, and security between the United States and Europe.

I am now in my second year as United States Ambassador to Italy: an honor, a privilege, and a great opportunity.

My team and I will partner with our Italian colleagues to keep our people safe and our economies growing.

Italy – indeed Europe – could have no better partner than America as we face the future together.

And the United States could have no greater partner than Italy and Europe.