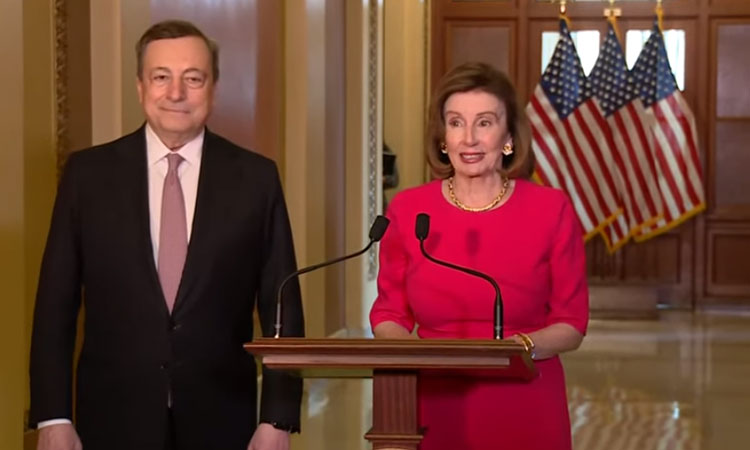 As the first Italian-American Speaker of the House, you can just imagine what an honor – personally, officially and in every way – it is to welcome the Prime Minister of Italy, Mario Draghi, to the Capitol.

I most recently saw him in Rome, when we were there for G20, as a lead-up into the Glasgow COP26 Conference on Climate, where Italy was a – the prime co-sponsor with the U.K.  That was a very productive meeting.  Countries from well more than 20 countries, some – some guests were there as well.  And we all benefited from hearing from the Prime Minister’s perspective in terms of climate, of course, but the economy and pandemic and the rest.  We look forward to that discussion today.

The – again, we salute the Prime Minister, coming as head of the Central Bank, European [Central] Bank to – to Italy to help grow the economy, to solve the pandemic crisis, to address climate issues and the rest.

But we have a special security relationship with Italy.  I always, when I go there, thank Italy for their hospitality to American troops who are there.  I sometimes compare Italy to an aircraft carrier: there’s so many troops, north and south.  But also, as a partner for peace in the world.

So, there’s so many issues that we have to discuss today.  We look forward to doing so in our bipartisan meeting.  But not before saying to [the] Prime Minister: you know, Italian Americans have contributed so much to our country.  And that’s a bridge between us.

But to this Capitol, Brumidi is the artist who decorated the Capitol.  So every day, we are enhanced and entertained by the artistry of an Italian American.

So with that, Mr. Prime Minister, I’m again pleased to welcome you personally, politically, officially, in every way.  Prime Minister of Italy.