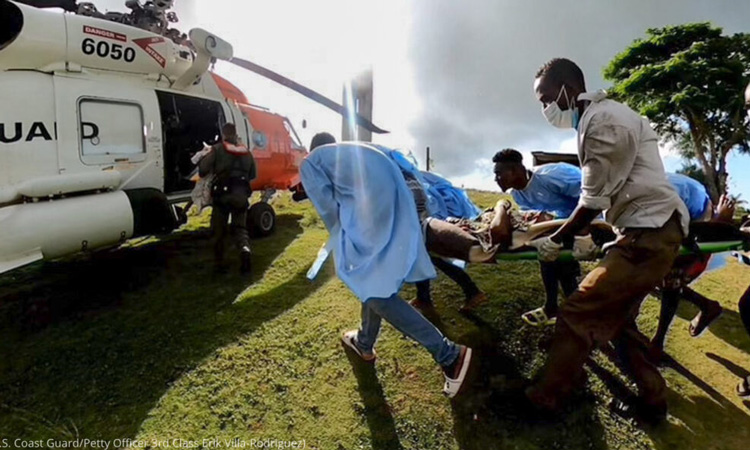 U.S. emergency workers are rushing to assist Haiti after a massive earthquake, searching for survivors, airlifting them to hospitals and delivering urgent humanitarian assistance.

President Biden authorized an immediate response after a 7.2 magnitude earthquake struck Haiti on August 14. The earthquake killed at least 2,200 people and injured more than 12,000 as of August 23, according to the government of Haiti. It damaged or destroyed an estimated 130,000 homes and 24 medical facilities.

The U.S. Agency for International Development (USAID) is coordinating the response, which has included search and rescue workers from the Fairfax County Fire and Rescue Department in Virginia, as well as U.S. Coast Guard and Navy helicopters. The USS Arlington arrived in Haiti on August 21 to support response efforts.

The U.S. is also working with partners to distribute urgently needed supplies to tens of thousands of people. In partnership with the U.N. World Food Programme, USAID’s Bureau for Humanitarian Assistance is providing 830 metric tons of food — enough to feed more than 62,000 people for one month.

“Haiti thanks the US for responding so swiftly to its request,” Bocchit Edmond, Haiti’s ambassador to the United States, said August 19. “We value this gesture and our friendship shall continue to endure.”

U.S. teams are working with international organizations and partner nations, including Argentina, Chile, Colombia, the Dominican Republic, Mexico, the Republic of Korea, the United Kingdom and the European Commission.