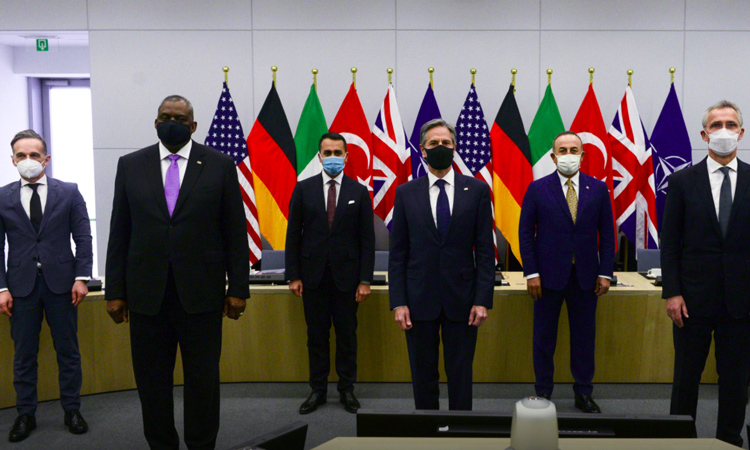 The United States and its allies are calling on Russia to stop its military buildup along the border of Ukraine and abide by its international commitments.

NATO Secretary-General Jens Stoltenberg called Russia’s largest military buildup since its illegal invasion and occupation of Crimea in 2014 part of a broader pattern of aggression that raises very serious concerns.

“Allies fully support Ukraine’s sovereignty and territorial integrity, and we call on Russia to de-escalate immediately, stop a pattern of aggressive provocations, and respect its international commitments,” Stoltenberg said.

In an April 15 statement, NATO allies expressed “support and stand in solidarity with the United States, following its 15 April announcement of actions to respond to Russia’s destabilising activities. Allies are taking actions individually and collectively to enhance the Alliance’s collective security.”

During their second meeting in a month, Blinken and NATO allies discussed joint plans for withdrawing troops from Afghanistan while continuing to support the Afghan people.

President Biden announced the same day that the United States and allied nations will begin a final withdrawal of troops from Afghanistan on May 1, with the goal of removing all troops by September 11 of this year.

Blinken praised NATO support in ensuring Afghanistan no longer serves as a haven for terrorists. He noted that NATO invoked Article 5 of its founding treaty, for the first and only time in history, after the September 11, 2001, terrorist attacks, denoting an attack on one is an attack on all.

“The United States will never forget the solidarity that our NATO Allies has shown every step of the way,” Blinken said. “No country could have achieved what we achieved as an alliance working together.”

At the height of collaborative security efforts, 50 NATO and partner countries committed troops to the coalition in Afghanistan. Currently, 35 partners and allies have forces there. “We will withdraw our troops responsibly, deliberately, safely,” Blinken said at the meeting.

The United States will continue to invest in the people of Afghanistan and support the right of Afghan women and girls to equal representation in society, Blinken added. After leaving Brussels, Blinken traveled to Kabul to meet with Afghan President Ashraf Ghani and Afghanistan High Commission for National Reconciliation Chair Abdullah Abdullah.

“I wanted to demonstrate with my visit the ongoing to commitment of the United States to the Islamic Republic and the people of Afghanistan,” Blinken told Ghani during an April 15 meeting, according to the Associated Press. “The partnership is changing, but the partnership itself is enduring.”