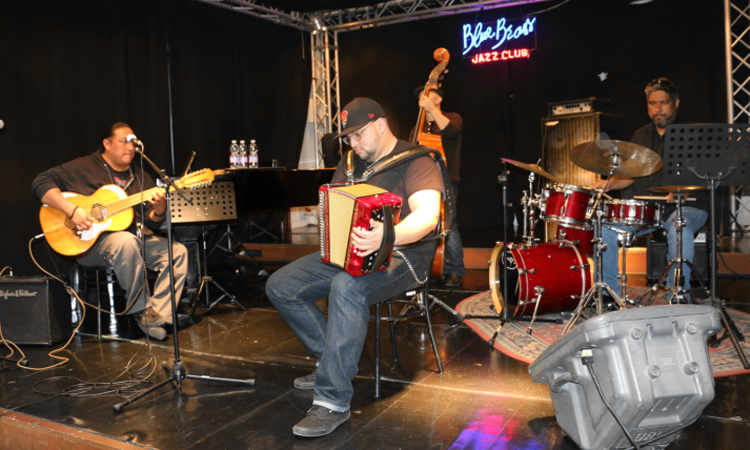 Energetic rhythms, Tejano sound, rock and jazz elements, and appreciative audiences  – these are the ingredients that made the Sicilian tour of Max Baca & Los Texmaniacs a success.

The band, which won a Grammy award in 2010, brought conjunto tejano music to Sicily, a unique music genre that comprises various forms of folk and popular music born among American communities of Mexican origin in the state of Texas.  Tejano music also includes German and eastern European influences heard in the polka or waltz, which were introduced by European immigrants at the end of the 19th century.

The band’s concerts and masterclass were realized thanks to the U.S. Department of State’s “Arts Envoy” program, an initiative that promotes various forms of art as tools for building mutual understanding and dialogue between peoples.  The band first performed at the 73rd annual “Almond Blossom Festival” in Agrigento as part of the International Folklore Festival.  The next day, a group of local music teachers, students, and general public welcomed the band at the Brass Foundation’s Jazz Club in Palermo, where the band conducted a tejano music masterclass while sharing the history and musical traditions of Mexican-American communities in Texas.  Finally, their Sicily tour ended with a performance at Palermo’s “Cultural Factories” as part of a four-day festival in honor of Palermo’s 2018 “Italian Capital of Culture” celebrations.