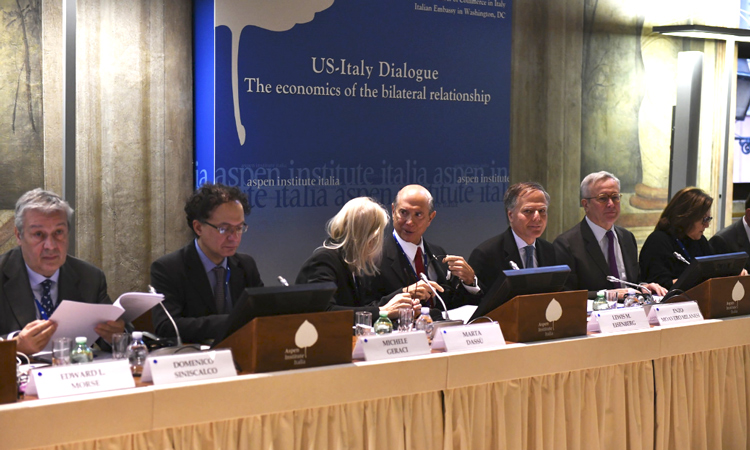 Thank you to Aspen Italia President Tremonti for the opportunity to be here today. It is an honor to share this platform with Minister of Foreign Affairs Moavero.

Let me also thank Marta Dassù and the staff of Aspen Italia for organizing this forum. I hope it will become an annual event.  These events are key to fostering closer ties between Italy and the United States.

Finally, I want to thank all of you for being here. I hope today’s presentations lead to fruitful discussions.

Last month, the world witnessed America’s vibrant democracy in action once again. 116 million Americans went to the polls to exercise their right to vote.  It was the largest turnout of any midterm election in a hundred years.

The elections were also one of the best run in recent memory. Federal, state, and county officials went to great lengths to ensure the integrity of the voting process.  Elections experts noted voting equipment was more reliable, registration lists more accurate, and election administrators better trained than ever before.

A new Congress will be installed in January – and with it we will face new challenges and opportunities. Of this you can be sure, however:  President Trump will continue to work with legislators to deliver security and prosperity to all Americans.

On the domestic front, there are two promising areas for bipartisan action: Improving the nation’s infrastructure, and lowering the cost of prescription medicines.

Trade between Italy and the United States is a cornerstone of our relationship. Before coming to Rome, President Trump “stamped on my back” clear orders to reduce the trade deficit between our two countries.  I told him I would do so by “Growing the Pie.”  Now in my second year as Ambassador, I can say we have succeeded by half:  We have grown the pie – in the past year, two-way trade between our two countries increased by over 10 percent to 68 billion dollars.

It’s clear Americans love Italian-made products. It’s easy to see why:  “Made in Italy” is synonymous with quality and design.

However, large trade imbalances are unsustainable in the long term. Agreements must be updated to reflect the economic realities of the 21st  The new trade pact between the United States, Mexico, and Canada is an excellent example of how the Trump administration is working with other countries to achieve better agreements.

We hope for an early harvest on technical trade barriers. However, we know negotiations will take time:  each party must pursue domestic processes for negotiating mandates on broader issues like tariffs.

In the United States, the Administration notified our Congress on October 16 it intends to negotiate a trade agreement with the EU. We are now in a public comment period that ends December 10.

With a free and fair trade agreement, we can reduce our trade deficit. Our economies can thrive.   Thanks to pro-growth policies, America’s economy is already soaring.  More than ever, America is a hub for talent and innovation – and that is reflected in all the products and services we sell.

As the president has said, “There has never been a better time to hire, build, invest, and grow in the United States.” And as President Trump tweeted, “Prime Minister Conte is working very hard on the economy of Italy – he will be successful!”

I will add: There has never been a better time to buy “Made in the USA” and “Made in Italy.”

But going back to U.S.-EU trade negotiations: I cannot overstate how critical a role Italy can play.  Yours is one of the largest economies in the world.  If European negotiators adopt Italy’s open approach to negotiations, I am confident both Americans and Italians will end up with a fair deal.

One area our negotiators will look at is energy. Energy diversification is critical to the national security of all nations.  We want to help our European partners and allies diversify.  One way we can do that is by making it easier for you to buy U.S. liquefied natural gas.

With Italy’s LNG import and storage capacity, U.S. LNG could make Italy a central player in European energy markets. It would also support Italy’s plan to use cleaner energy.  LNG means less dependence on volatile sources, more economic opportunity, and cleaner air.  It is a win, win, win for Italians and Americans alike.

When discussing trade we must discuss China and its unfair trade practices. Its massive theft of intellectual property and industrial subsidies distort global trade and harm those of us who play by the rules.

China is also abusing our open economies to dump its industrial overcapacity, particularly in steel and aluminum.  In March, President Trump imposed tariffs on those sectors to protect our national security.

We hope the EU will join the U.S. in taking measures to restore integrity to our trade system. China’s trade-distorting policies harm our businesses, our workers, and our national security.  We must defend our interests.

As I speak here today, two U.S. Department of Justice cyber prosecutors are in Rome. They are exchanging information with Italian officials on attribution techniques, and the prosecution of individuals sponsored by China, Russia, and North Korea.

We must continue to work closely on this issue. Cyberattacks have the potential to cripple electricity supplies and financial systems.  The stakes are high.  If we do not invest in cybersecurity, we risk tremendous harm to our economies and our national security.

I would be remiss if I did not raise the issue of sanctions – perhaps one of the most meaningful diplomatic tools at our disposal. As Prime Minister Conte has said, sanctions are a means to an end, not an end in themselves.

In Iran’s case, the end is to curtail the Iranian regime’s ability to sponsor terrorist acts. That includes assassination plots in Europe, as has been reported in the press.

In Russia’s case, the end is to curtail Russia’s malign behavior in Ukraine – as we have seen in the past week. Let there be no confusion:  America would like to have Russia as a friend and a positive force in world affairs.  But until it changes course, and abides by the Minsk Agreements, it is difficult to justify lifting sanctions.

I must emphasize that in imposing sanctions the United States has been careful to minimize collateral harm to our friends. For example, the Department of State granted Italy an exemption to gradually end its purchases of Iranian oil – and our sanctions on Russia have been carefully targeted at oligarchs capable of positively influencing President Putin, not ordinary citizens.

In closing, you can see there are many challenges before us, but optimism prevails. Italy and the United States have many resources to draw from, not the least of which is the dedication, experience, and expertise of people like you.

My country is grateful for the transatlantic alliance – perhaps the greatest in history – and is committed to maintaining its strength and resilience.

Our world is changing at a rapid pace, but our bilateral and transatlantic alliance – which has paved the way to 75 years of unprecedented peace in Europe – cannot, will not, and must not waiver.

I thank you for your kind attention – and I look forward to a productive and interesting discussion. Thank you. 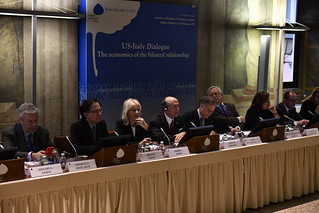