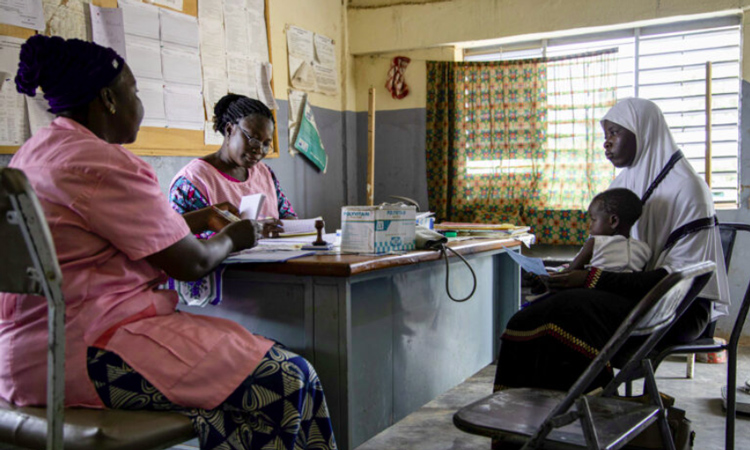 An international team has produced a new malaria vaccine that is showing great promise in clinical trials in Burkina Faso, where malaria is a leading cause for doctor visits. (© Olympia de Maismont/AFP/Getty Images)

Malaria kills more than 400,000 people each year, most of them children under age 5. That may change soon, thanks to a promising vaccine developed by U.S. and other researchers.

Malaria is spread by mosquitos and infects more than 200 million people annually.

The new vaccine, called R21, has proven 77% effective in preventing malaria in children between 5 and 17 months old, according to a study published in the medical journal The Lancet May 15.

“These significant results support our high expectations for the potential of this vaccine,” said University of Oxford’s Adrian Hill, a co-author of the study, noting the results are a major step toward meeting the World Health Organization’s goal of developing a vaccine that is 75% effective (PDF, 2MB) against malaria by 2030. The most effective malaria vaccine previously tested is only 56% effective.

Researchers from the U.S., U.K., Burkina Faso, India and Kenya developed and tested the new vaccine. The promising results are from clinical trials conducted in Burkina Faso and additional testing is underway. The Serum Institute of India has agreed to supply 200 million doses of the vaccine annually “at a very cost-effective price” if it is approved.

The R21 vaccine targets the parasite that causes malaria and includes an immune system booster made by Novavax in Gaithersburg, Maryland.

The U.S. government’s fight against malaria is part of its commitment to global health, which also includes the President’s Emergency Plan for AIDS Relief and the fight against the COVID-19 pandemic.