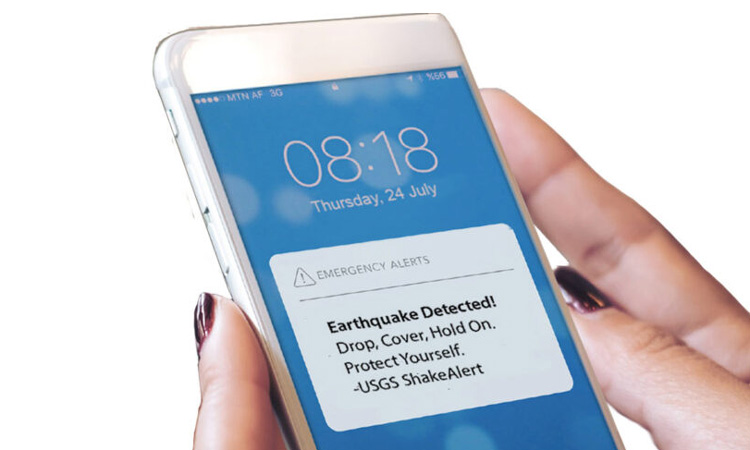 The ShakeAlert warning will show up on any smartphone, like this one. (U.S. Geological Survey, Department of the Interior)

When an earthquake begins, a few seconds’ warning can mean the difference between life and death.

New U.S. technology will give millions that warning. Already in domestic use, it’s being tested in countries such as Chile, Greece, Israel, the Republic of Korea and Turkey, among other nations.

The United States Geological Survey (USGS) partnered with several West Coast universities and a Swiss research university to develop a mobile app that sends millions of U.S. West Coast residents alerts tens of seconds before an earthquake hits their area.

The app, ShakeAlert, was made possible by $12 million in U.S. government funding and involved placing hundreds of seismometers across Canada and the U.S. states of Washington, Oregon and California.

When the sensors detect the beginnings of an earthquake of a magnitude measuring 5.0 or greater, residents receive a message telling them to seek cover.

“Systems powered by ShakeAlert can turn mere seconds into opportunities for people to take life-saving protective actions,” said USGS official David Applegate in a May 4 statement, “or for applications to trigger automated actions that protect critical infrastructure.”

An algorithm to save lives

The ShakeAlert system arrives after 13 years of development, academic collaboration and state-by-state testing.

A University of California at Berkeley algorithm, ElarmS — short for Earthquake Alarms Systems — was among the first algorithms to provide data for ShakeAlert.

U.C. Berkeley researchers developed and tested it in 2007. It worked well, issuing alerts even before S-waves — the most damaging waves that rumble underground — reached the earth’s surface.

The United States joins countries such as Japan, Mexico and Chile, who have government-sponsored alert systems to signal major earthquakes to their citizens.