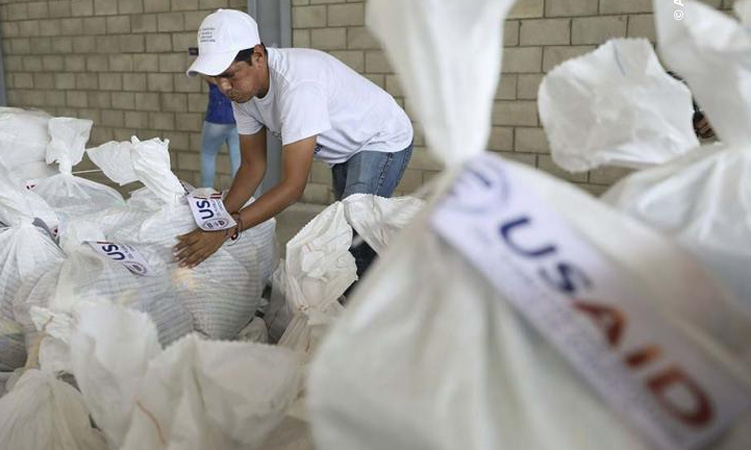 Former President Nicolas Maduro’s systematic economic mismanagement, corruption, and violent oppression have caused severe shortages of food and medicine and needless human suffering, resulting in an exodus of millions of Venezuelans to neighboring countries. The spiraling effects of this political and man-made economic crisis have dire humanitarian consequences.

On February 8, U.S. Ambassador to Colombia Kevin Whitaker participated in press conference at the Collective Center in Colombia, where he stated, “The United States has dedicated about 140 million dollars to this crisis already, 93 million dollars of which has been disbursed here in Colombia, and…we expect more to come. This is a down payment. This is just the beginning. It’s important; it’s significant. It will be distributed to Venezuelans in Venezuela. But it is an effort to respond to 20 years of mis-management of corruption, of criminality, and of inefficiency. That will take time to address, but as my counterparts here indicated, there is great will in the international community to respond.”

On February 7, Administrator Green welcomed U.S. Special Representative for Venezuela Elliott Abrams to USAID, where they met with USAID employees working to mobilize aid for those affected by the crisis in Venezuela.

In remarks to the press, Special Representative Abrams said, “…We urge countries to recognize Juan Guaido as interim president and join us in responding to his call for immediate international humanitarian assistance to meet the needs of the Venezuelan people.”

During his State of the Union Address on February 5, President Donald J. Trump reaffirmed U.S. support for Juan Guaido as interim president of Venezuela and for the democratic aspirations of the Venezuelan people. President Trump said, “We stand with the Venezuelan people in their noble quest for freedom, and we condemn the brutality of the Maduro regime, whose socialist policies have turned that nation from being the wealthiest in South America into a state of abject poverty and despair.”