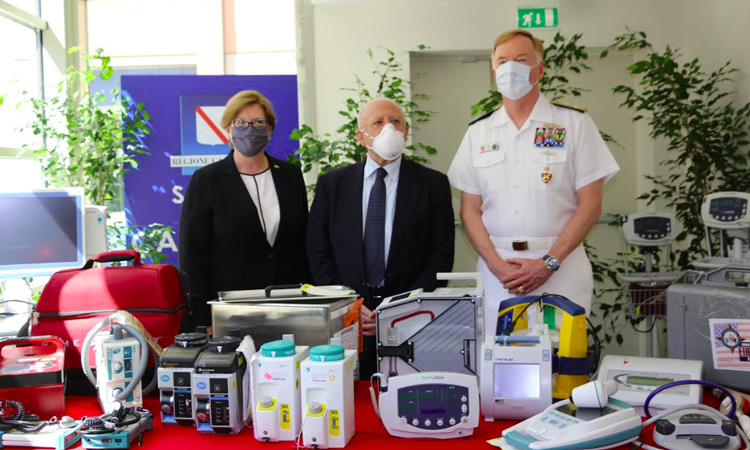 “The medical supplies that today the American Navy delivers to the Sea Hospital are part of a substantial package of assistance to Italy. The United States stands by our friends and allies, especially when a joint effort is needed in the face of global challenges,” Consul General Mary Avery said during the presentation of the donation of medical supplies by the U.S. Navy to Regione Campania. As part of a series of U.S. Navy donations of medical equipment to hospitals in southern Italy, she spoke at a ceremony held on June 25 at Ospedale del Mare, along with Adm. James Foggo, Commander, U.S. Naval Forces Europe-Africa, and President of the Campania Region Vincenzo De Luca.

She continued by emphasizing that “our presence here today, together, is the most evident symbol of the great friendship between the United States and southern Italy.”

U.S. naval bases and hospitals have donated $336,000 worth of medical supplies to the Campania Region to contribute to the recovery of Italian local communities following the crisis caused by COVID-19. Donation from the U.S. Navy took place in coordination with the DSCA (Defense Security Cooperation Agency) Humanitarian Assistance Progra and the U.S. Mission to Italy, and is part of the $100 million Italian assistance package announced at the end of March by President Donald J. Trump.