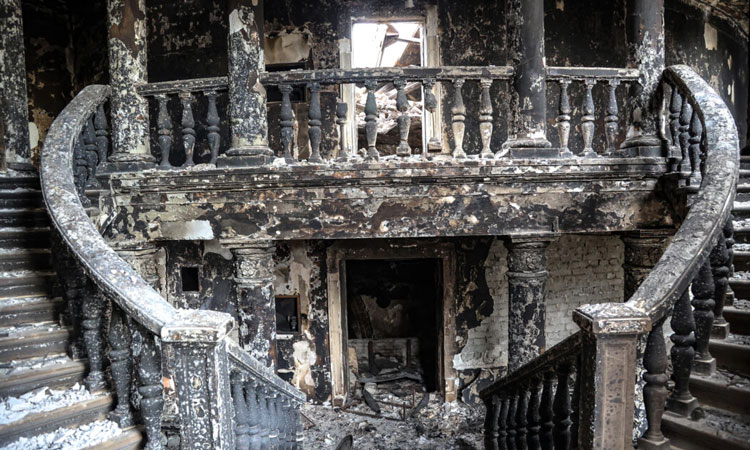 “This is a struggle for our cultural heritage,” said Ihor Poshyvailo, general director of the National Memorial and the Maidan Museum, during an online discussion April 28 hosted by the National Museum of American Diplomacy.

“We should not separate the humanitarian and culture spheres. Culture cannot wait. It needs to be preserved, especially when it is deliberately targeted by an aggressor,” Poshyvailo said.

Russia’s bombing of the Donetsk Academic Regional Drama Theatre in Mariupol on March 16 is a prime example, he said. Even though the theater was clearly identified as sheltering civilians, Russia’s bombs reduced it to rubble, killing as many as 600 people. The Ukrainian Institute describes the theater as the only one in Mariupol that “had the status of an architectural monument of national importance.”

Nearly 100 places of worship and dozens of monuments, libraries and museums have been damaged since Putin began his war in February.

Sites showing major damage include the former Vasyl Tarnovskyi Museum of Ukrainian Antiquities in Chernihiv, which served as a children’s library, shown below.

Also damaged were the:

“This is not a war for territory or wide political goals,” Poshyvailo said. “It is a war against identity, memory, culture and our future.”

Poshyvailo co-founded the Heritage Emergency Response Initiative to assess damage and plan for renovation after the conflict ends.

Meanwhile, art and culture professionals from Ukraine, the United States and around the world are doing what they can to protect Ukraine’s cultural heritage from Putin’s war.

Olesia Ostrovska-Liuta, director general of the Mystetskyi Arsenal, a cultural agency, said during the discussion that the attack on Ukraine’s culture is composed of three elements:

She said Russian soldiers have looted sites in Mariupol and Melitopol.

The New York Times recently reported that Russian forces stole gold artifacts from a museum in Melitopol that date to the 4th century B.C.E. Scythian empire. Ivan Fyodorov, the city’s mayor, said it was one of the most valuable collections in Ukraine.

“This Russian war in Ukraine is very tightly connected to culture,” Ostrovska-Liuta said. “The basic assumption which lies beneath the assault is that Ukraine should not exist as a separate phenomenon. …  Any Ukrainian otherness from Russia should be erased.”

Russia’s barbaric treatment of Ukrainian cultural sites is not new. Russia has demolished gravesites and seized 4,095 Ukrainian national and local monuments in Crimea since 2014, when it forcibly occupied Crimea and instigated conflict in areas of the Donbas region.