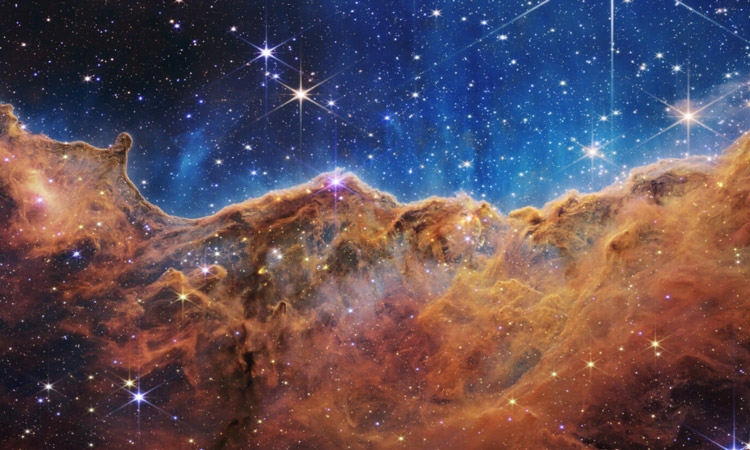 The James Webb Space Telescope captures a star forming in the Carina Nebula roughly 7,600 light-years away from Earth. (NASA/ESA/CSA/STScI)

The Webb’s first, full-color image (at right) shows thousands of galaxies. This infrared image of the universe, the deepest and sharpest ever produced, was released on July 11 at the White House by President Biden and NASA experts.

A deep field observation is an image of a portion of the sky taken with a very long exposure time to detect and study faint objects.

“You’re seeing galaxies that are shining around other galaxies whose light has been bent,” NASA Administrator Bill Nelson said. “And you’re seeing just a small little portion of the universe.”

The Webb telescope photo is a composite of images at different wavelengths. Building on the Hubble Space Telescope’s legacy, the Webb has captured images at depths of infrared wavelengths beyond any taken by the Hubble.

The images are a result of international scientific collaboration among NASA, the U.S. space agency; the European Space Agency; and the Canadian Space Agency. Going forward, the $10 billion Webb telescope will help researchers learn more about galaxies’ masses, ages, histories and compositions.