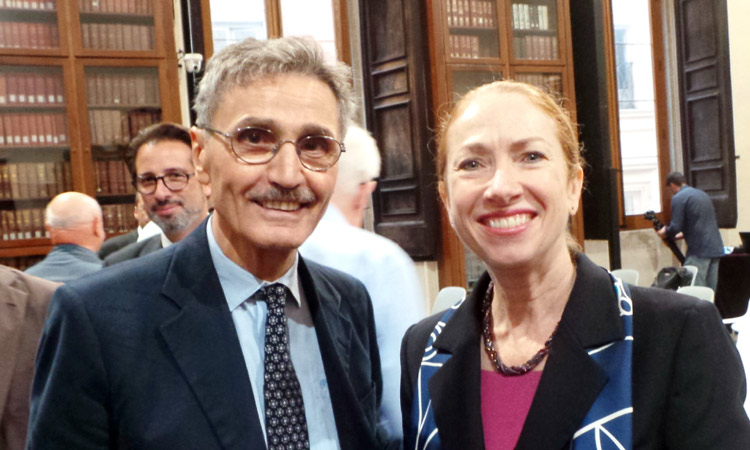 As always, it is a pleasure to be here at the Centro Studi Americani. I would like to begin my brief remarks by congratulating Professor Sergio Fabbrini on his latest accomplishment: the publication of his 15 th book: Sdoppiamento – Una prospettiva nuova per l’Europa.

I am pleased that Professor Fabbrini chose Centro Studi Americani as the venue to present his latest work, and in this regard, I would like to thank Roberto Arditti for organizing this forum to discuss the future of Europe.
For me, this evening’s event is a perfect example of how the Center has increasingly become a reference point in Rome for sophisticated programs. These conferences, panel discussions, roundtables and lectures not only address topics such as the culture, history, values, policies and politics of the United States, but also a wide range of other timely and compelling issues – for example, the security of the Mediterranean basin and efforts to counter violent extremism, the migration crisis that is confronting Europe in general and Italy specifically, and Russian engagement in Eastern Europe and the Middle East. Time and again, the Center manages to advance our understanding of these European, transatlantic and global issues while continuing to cast an informative eye on America’s role in and relationship with the world.

The United States has long worked toward the creation of a strong, prosperous and stable Europe; a Europe that is a strong partner and a Europe which shares our values. The success of these efforts depends in no small part on opinion leaders like Professor Fabbrini who, through scholarship and engagement, help promote greater understanding between the United States and Europe.

And seeing the impressive group of panelists Roberto Arditti has organized for these evening’s program, I am sure that we can count on some lively discussion this evening.

The basis for tonight’s discussion will be Professor Fabbrini’s new book. In it, he deftly analyzes the various challenges currently confronting the European Union: a common currency but no common fiscal policy, the influx of migrants and a rise in xenophobia, terrorism, Brexit, and last but not least, an evolving European identity and the rise of populist and anti-European or Euro-skeptic movements. Starting from his view of the pluralistic nature of Europe, Professor Fabbrini provides an insightful analysis of a new model of Europe: a common market shared by all member states and a federal union among Eurozone countries.

I am looking forward to hearing what role he and the panelists envision for the United States in this future for Europe and what lessons can be learned from the American experience with federalism over the past two hundred plus years.

Professor, the floor is yours.