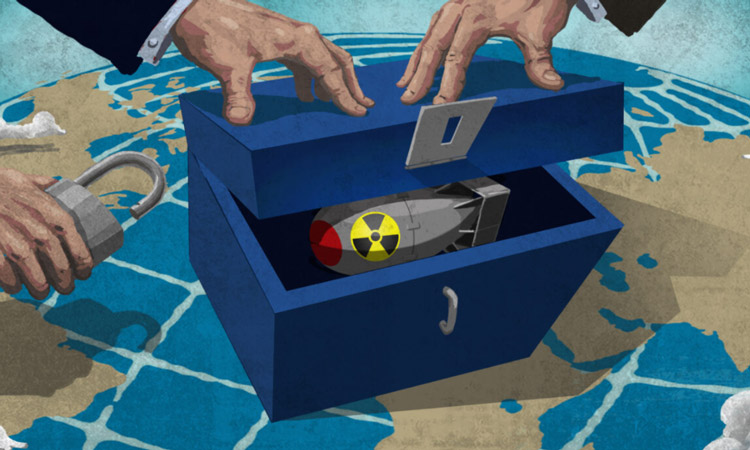 Nuclear weapons pose an existential threat. To confront that threat, the United States is committed to working with other nations to prevent nuclear war and strengthen the landmark Nuclear Non-Proliferation Treaty (NPT).

In a January 3 joint statement, the United States and the other NPT nuclear-weapon states called efforts to avoid war and reduce strategic risks “foremost responsibilities,” and pledged to continue pursuing nuclear disarmament.

“We affirm that a nuclear war cannot be won and must never be fought,” the United States, France, the People’s Republic of China, Russia and the United Kingdom said in the statement, which also emphasized their intent to “prevent an arms race that would benefit none and endanger all.”

“We believe strongly that the further spread of such weapons must be prevented,” the statement says.

Upholding the NPT is central to reducing risks from nuclear weapons.

At the Tenth NPT Review Conference, which parties plan to hold this year in New York, the United States will work with other NPT members to preserve and strengthen the treaty that has helped prevent nuclear war for more than 50 years.

“The Biden-Harris Administration is deeply committed to restoring U.S. leadership on arms control and nonproliferation and to working closely with our partners and allies to address 21st Century challenges,” Under Secretary of State for Arms Control and International Security Bonnie Jenkins told Chatham House, a London think tank, on November 16.

Over the last year, seeking to reduce nuclear threats and risks, the United States and Russia extended the New START arms control treaty and resumed a Strategic Stability Dialogue.

Signed in 1968, the NPT entered into force in 1970. It aims to prevent the spread of nuclear weapons, advance nuclear disarmament and promote cooperation on peaceful uses of nuclear technology.

Since the NPT was negotiated at the height of the Cold War, the United States has reduced its nuclear weapons by 88%, according to the latest official release of U.S. stockpile data. Global stockpiles have fallen by more than 80% since their peak in 1986, according to the Federation of American Scientists, which tracks global security issues.

Countries that are party to the NPT meet every five years to assess its implementation. The Tenth NPT Review Conference was scheduled for 2020 but was postponed to this year due to COVID-19.

Jenkins described the NPT Review Conference as a critical opportunity for promoting collective security. At the conference, the United States will seek to:

The United States also will not hesitate to raise pressing proliferation challenges, including from regimes in Iran, Syria and North Korea, Jenkins said.

While the NPT has helped foster peace and prosperity, Jenkins said implementation challenges remain. At the conference, the United States will work with others to strengthen the NPT’s role and effectiveness for future generations.

“No nation can afford to remain silent on the threats posed by nuclear weapons proliferation, nor ignore the vast potential of peaceful uses of nuclear energy, science, and technology to combat climate change, address the UN Sustainable Development Goals, and build a better world,” Jenkins said.