Home Homepage | News & Events | Would you live in a sustainable house? 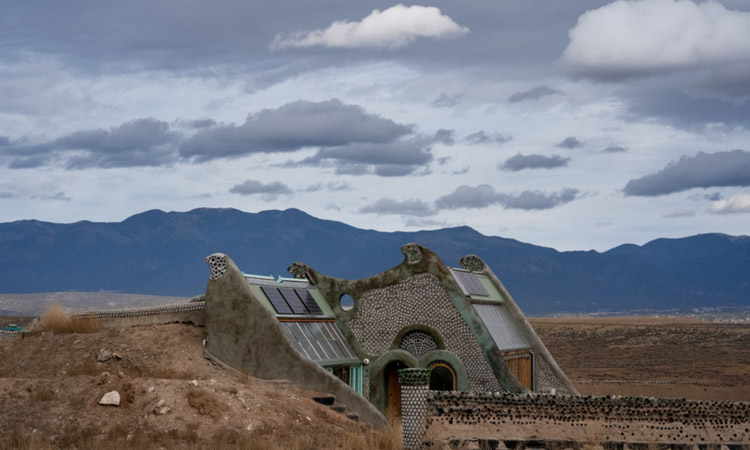 What if houses were cheaper to build, generated their own energy, and didn’t damage the environment?

After graduating from architecture school in 1969, Michael Reynolds decided to make that question his life’s mission and prove that one man’s trash is another man’s treasure.

“I wasn’t trying to make a giant business or anything,” Reynolds said. “I was just doing this for myself and my friends around the area.”

He’s spent the last 50 years designing and building Earthships, self-sufficient houses — or “vessels” as he calls them — in Taos, New Mexico, and around the world.

Each house provides means for food, water, energy, comfortable shelter, wastewater treatment and garbage reuse. Reynolds ensures that none of the homes use fossil fuels for heating, which means each is carbon neutral in its energy use.

Reynolds’ vision resulted in over a hundred of the “sustainably autonomous” structures in Taos, and the movement has grown over the past decade. He estimates hundreds more exist across the United States and around the world, from Canada to Malawi.

Reynolds had the idea to build the first Earthship in 1970, watching the evening news. A story about timber shortages in the Pacific Northwest followed by one about a surplus of empty beer cans made Reynolds wonder if there were a solution to both issues.

“The whole Earthship concept came about from me responding to the media when the media was telling me about problems that we’re having on this planet,” he said.

He constructed his first house using beer cans as insulation inside building blocks — a technique he later patented. Once the beer companies heard, they funded the entire construction project, he says.

He quickly realized he wanted to make more homes where residents would have everything they needed to survive — namely, food, water, shelter and wastewater treatment — while also reducing their environmental footprint.

Around 40% of each Earthship is built with natural or recycled materials and produces enough food to meet 25%–50% of the resident’s needs, if the homeowner plants a garden.

The Earthships also provide shelter through earth-berming and constructing thick slabs insulated with reused garbage — such as tires and glass bottles — which keeps each unit warm throughout the winter and cool in the summer. (A typical 140-square-meter Earthship uses 1,000 tires and up to 500 glass bottles in the walls.)

Solar panels power the unit and large barrels capture, store, recycle and re-treat rainwater for all plumbing purposes — even using grey water (wastewater from all household sources, such as showers and sinks, except for toilets) to water indoor and outdoor gardens where food is grown.

“We need to move faster toward innovation,” he said. “And it is possible. We have the mechanisms.”

Other architects and designers in the United States have followed in Reynolds’ footsteps, by incorporating recycled materials into the construction of their houses. Two examples are the Wonder Haus in Colorado and Cork House in Texas.